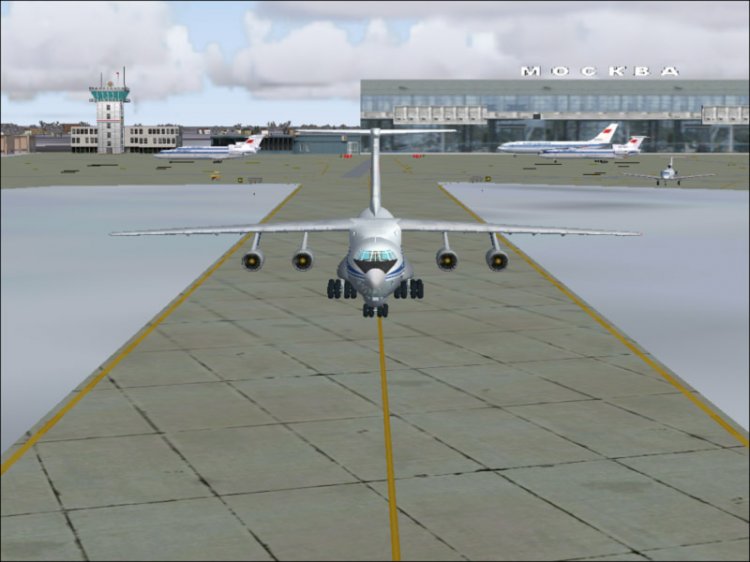 - Screenshot 2
- Screenshot 3
Gives you a package with the IL-76TD VC texture Soviet times, with the sounds gaugami. This package was found recently in their archives, in the old panel, I think this is the first release. This is the second IL-account, which I drained here, because package in the first flight was made by himself and found a lot of jambs, it is not all work properly. So, accept that aircraft. PS Dear simmery who have a dislike of this aircraft, please do not swing and does not foul on him in RєRѕRјRјRµRЅS‚R°S…, but there are such friends!
→ Size: 25 MB
→ Date: 13 years ago (03.04.2009 19:42)
→ Author: Сергей Варнавский
→ Uploaded by: alex_gorbun (uploaded 37 files )
→ Approved by moderator: AirArt
→ License: Freeware - Free version, Unlimited Distribution
→ Downloaded: 16491 time(s)
Comments 28 View ZIP-Content Download 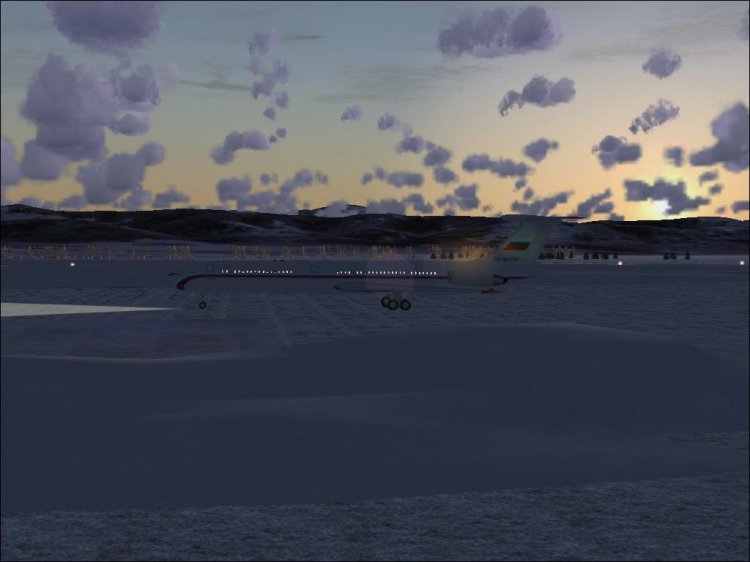 - Screenshot 2
This model assembly in open spaces Avsima. Includes panel FAC, the second pilot and navigator. Completed with an increase in exhaust fumes of gas, as well as the voice of the crew of the Ilyushin Il-76TD. In the toolbox is a calculator for calculating the fuel, and a few more "stuff" for fans of the IL-62M
→ Size: 69 MB
→ Date: 12 years ago (28.12.2009 17:49)
→ Author: Project Tupolev
→ Uploaded by: ValeryS (uploaded 1 files )
→ Approved by moderator: UDVA
→ License: Freeware - Free version, Unlimited Distribution
→ Downloaded: 16463 time(s)
Comments 82 View ZIP-Content Download 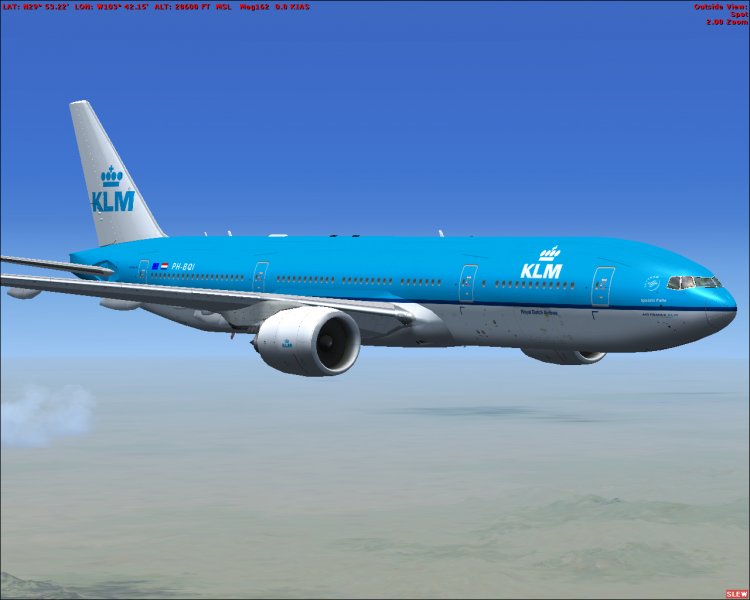 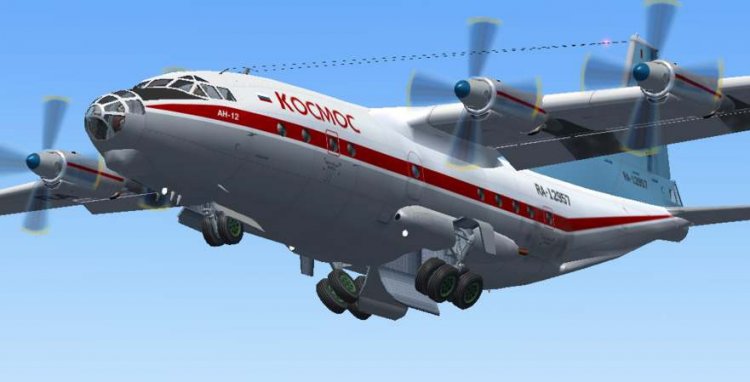 Antonov An-12BK (Cub) for FS 2004 - beta-version of 2009. Legendary Russian turboprop
long ranger transport, which is well known in many countries.
GMax model, complete animation, detailed worker VC with 3D by crew and animation co-pilot.
8 versions textures, panel and gauges, view from a cabin of the navigator. 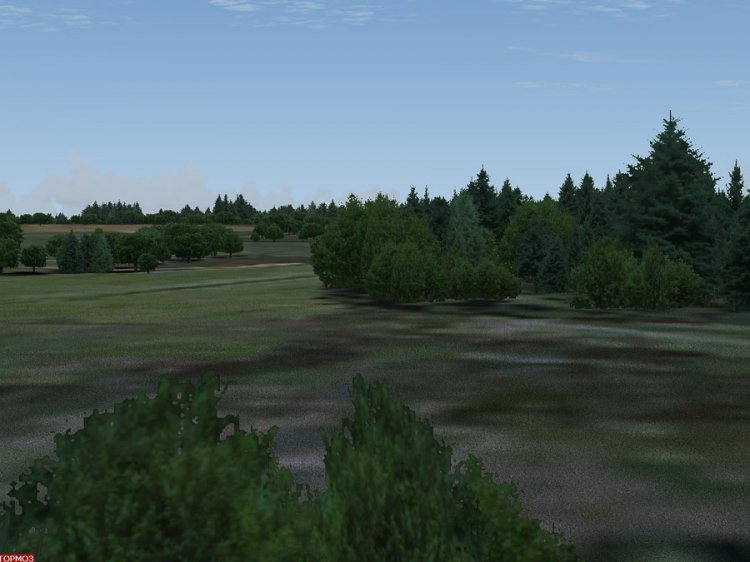 On behalf and on behalf of Alexis (VITAMIN) spread a full package VC textures for the models available in the archive. This package probably only to me and stayed after the unfortunate crash disk source model. Added missing files in previous versions.
→ Size: 70 MB
→ Date: 13 years ago (15.09.2009 00:28)
→ Author: VITAMIN
→ Uploaded by: OLTIM (uploaded 6 files )
→ Approved by moderator: lockon
→ License: Freeware - Free version, Do Not Redistribute
→ Downloaded: 16353 time(s)
Comments 37 View ZIP-Content Download 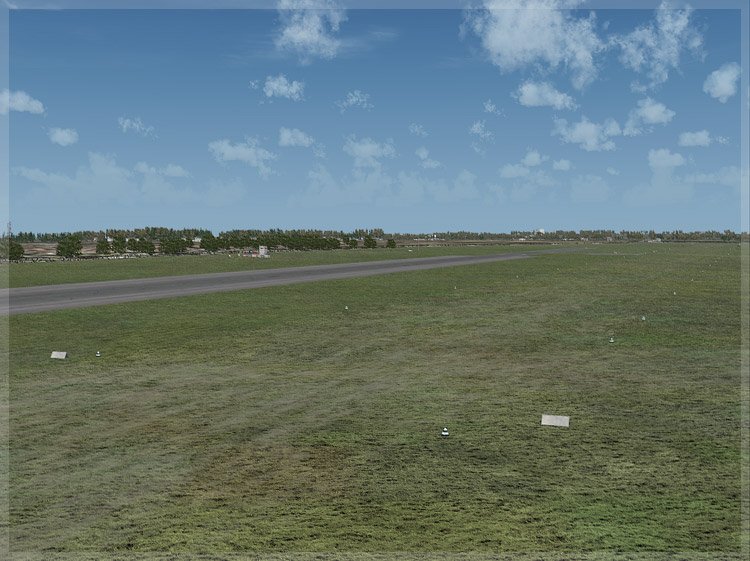 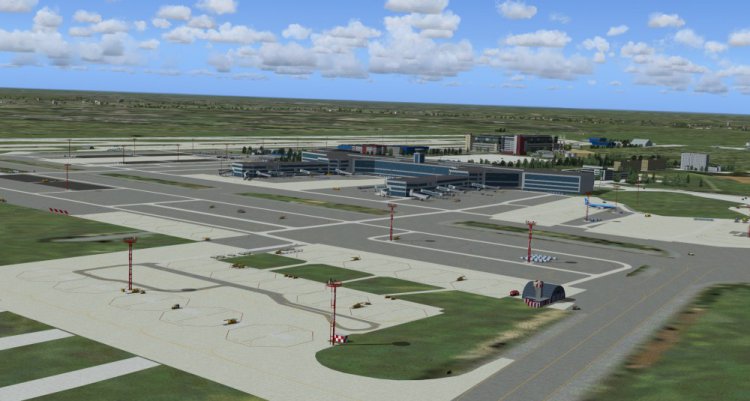 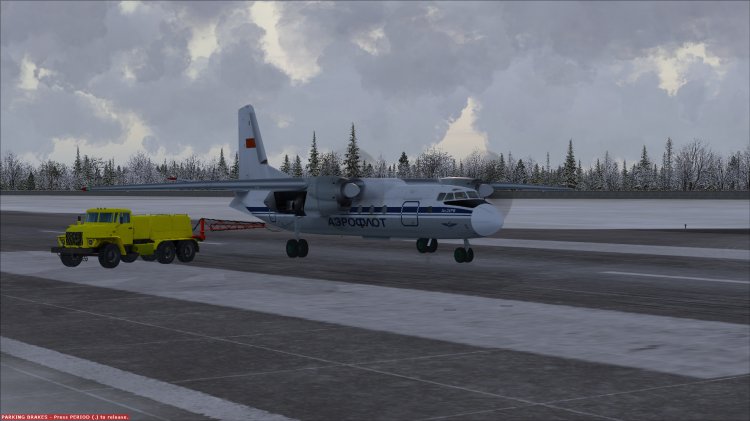 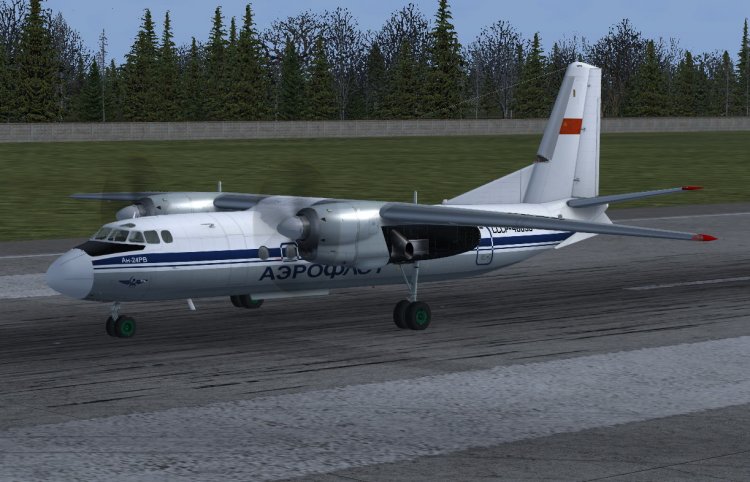 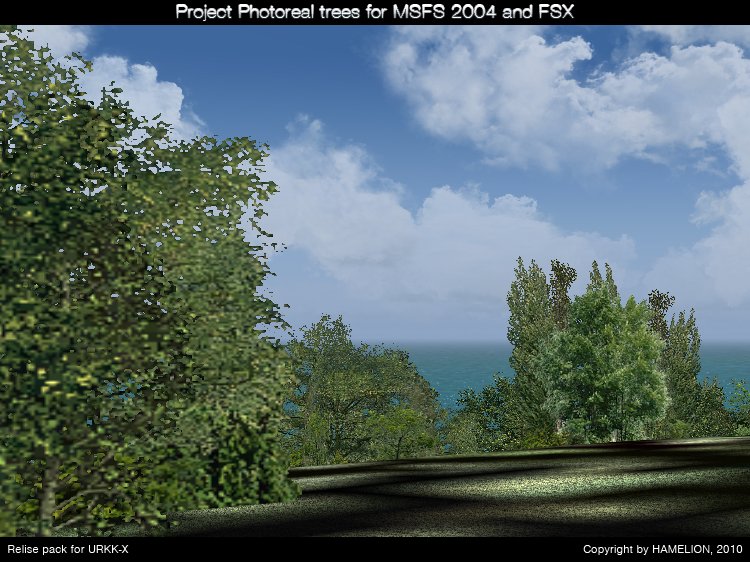 Textured trees for MSFS 2004 and FSX from the project URKK-X. The sophisticated texture of all the trees. Suitable for both Russia and other countries. Textures give the effect of density and realism. Now planting will be even nicer and more real, when under the wing will float real trees.
→ Size: 5 MB
→ Date: 12 years ago (16.08.2010 10:55)
→ Author: HAMELION
→ Uploaded by: HAMELION (uploaded 28 files )
→ Approved by moderator: omega
→ License: Freeware - Free version, Unlimited Distribution
→ Downloaded: 16090 time(s)
Comments 44 View ZIP-Content Download 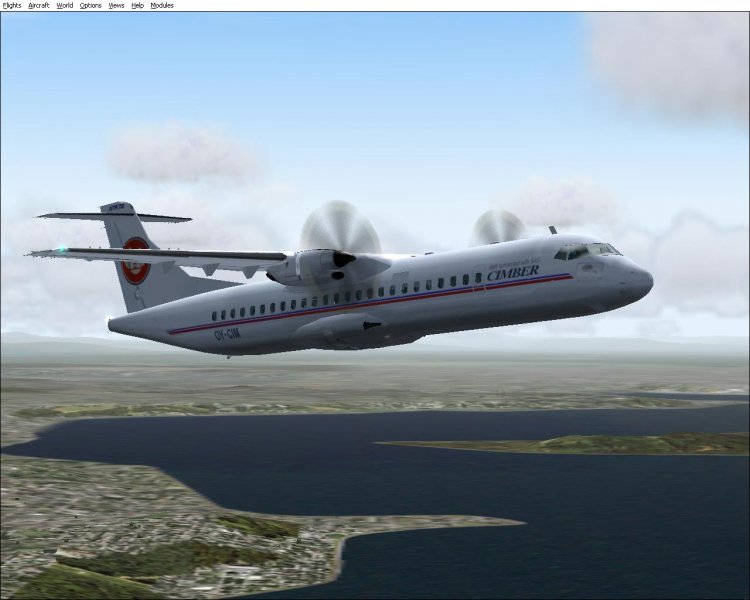 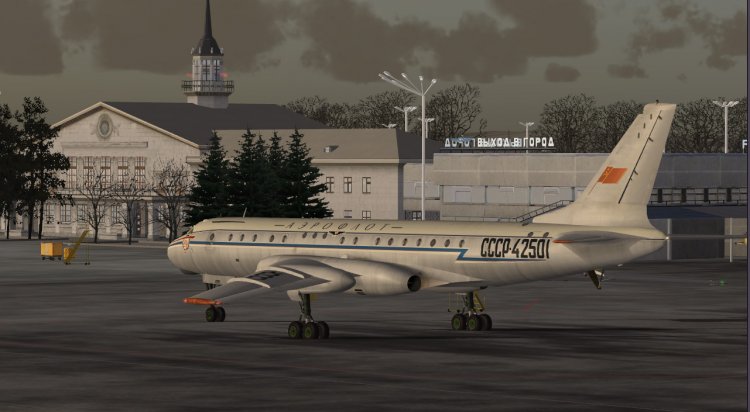 - Screenshot 2
- Screenshot 3
I am pleased to present to you the attempt to create a simulator of the great liner, the beloved Tu-104. There was a lot of work to create a fully flying aircraft, eventually spread a beta version of the project. Work on the project continues, plans to add its weight delicacies. While I beg to assess what has been developed by at the moment. Airplane tested and overflew, tried to remove all problemki to reupload. Discussion of the project here: http://www.avsim.su/forum/topi​c/78391-tu-104/page__st__120, before the flight recommend for diving in the era of the Tu-104 to see here is: http://www.avsim.su/f/raznoe-v​ideo-93/tu-104-18186.html?acti​on=comments&;hl =% F2% F3-104. Many thanks to everyone who participates in the project and to who helped draft, people without whom this project would not have been possible: Oleg Chernikov (technical advice, the dynamics of the model), Mikhail Mitin (comprehensive assistance in priborostoenii), Alexei Litvinov (multiple devices), Stepan Gritsevsky, and many others! ! Before you install and read the flight manual necessarily located in the folder FS2004/Aircraft/Tu-104/DOCUMENTATION/Tu-104.pdf. Folder Tu-104 in any case can not be renamed, otherwise wasted clicks toggle switches and voice of the crew. Enjoy your flight, soft planting, friends!
→ Size: 27 MB
→ Date: 12 years ago (01.12.2009 00:54)
→ Author: Михаил Степанов, Олег Черников (Aleck), Михаил Митин (Wishmaster), Антон Николаев (Xomer), Дмитрий Шевцов, Голосов Сергей DZIES
→ Uploaded by: Mihail Stepanov (uploaded 48 files )
→ Approved by moderator: Lenya69
→ License: Freeware - Free version, Do Not Redistribute
→ Downloaded: 16022 time(s)
Comments 44 View ZIP-Content Download

Reload script Pulkovo ULLI for FSX "Today and tomorrow".
Replaced with models of lighting masts to a "light", in order to raise fps on slower computers , removed some minor objects
For the scenario used by custom building of "Project ULLL"
http://www.avsim.su/f/fs2004-s​cenarii-44/proekt-ulll-2011-39​153.html
with slight modifications and additions, plus additional new buildings
The new terminal authors Alexei Hohreva (MrJam) and Maxim fleece (maxtor). Similarly , the authors express a special thanks for the material on the new terminal of http://www.ozgurtelemcioglu.co​m/
Building on the approach of "Approaches to Pulkovo" FS2004 Valeriy Durynin
http://www.avsim.su/f/fs2004-s​cenarii-44/podkhodi-k-pulkovo-​22332.html
Red diamonds from ANRI

Large landklass neighborhood just for textures FTX ORBX GLOBAL
Change of seasons in the script , not only trees but also buildings, winter textures of buildings on the season HW
Available option of adapting the script for DX10
Helped create the script information , as well as photographic evidence did pointers for taxiing airport "MrJam".

PS Afсad according to the latest data had been recorded , will be made later by the official , and not a temporary schemes.