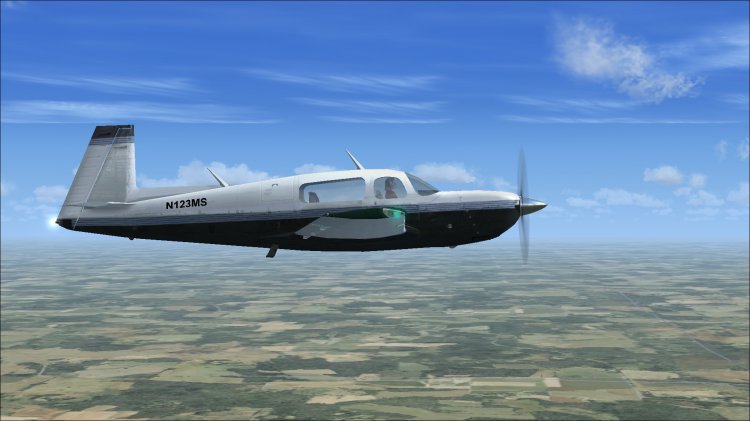 - Screenshot 2
- Screenshot 3
The actual Mooney M20Bravo has a slightly smaller fuel capacity than its trainer model, and I've fixed that bug. The maximum payload from this has not changed much, but it has become more fun to take off. The advantages of Mooney Bravo for FSX-2006/2007 are the improved visualization that renders the pressurized cabin, and the implemented automatic cross-feeding of fuel from two tanks at the same time, which greatly simplifies the piloting of this handsome man with a symmetrically distributed load. The set of cabins includes both the usual analog and the modern "glass" Garmin-1000. It is especially valuable that this entry-level business jet is fully compatible with Lockheed-Martin Prepar 3D v.4 (I personally checked it). Of the features of the automatic cross-fuel supply, I note that in the 3D cockpit it works with the central fuel valve blocked when the engine is started on the ground; if you can't resist and start the engine according to the Mooney M20Bravo control card, which recommends manually controlling the fuel supply, then you will then have to play with the central fuel valve for the entire flight in order to maintain an acceptable lateral balance of the aircraft. Installation is traditionally simple: remove the stock Mooney Bravo folder from your FSX/P3D and replace it with the folder from this archive. Happy flying!
→ Size: 24 MB
→ Date: 2 months ago (18.11.2022 10:28)
→ Author: Microsoft Corp. (текстуры, ливреи, приборы, визуальная модель), Виталий Цимух Learjet45 (загрузочная модель)
→ Uploaded by: Learjet45 (uploaded 12 files )
→ Approved by moderator: Ляпучка
→ License: Freeware - Free version, Unlimited Distribution
→ Downloaded: 62 time(s)
Comments 0 View ZIP-Content Download